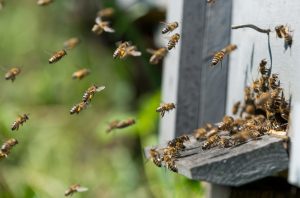 Tampa’s warm, humid springs and summers provide the ideal conditions for stinging insects. A stinging insect is any insect equipped with a stinger (usually embedded in the rear end of the insect’s body) they use specifically to protect themselves or their nests from danger. When a stinger pierces the skin, it injects just enough venom under the skin to produce a red, itchy, painful bump. People who are allergic to stinger venom suffer more severe symptoms that may require emergency treatment.

Bumblebees have stubby wings and yellow and black patterns on their abdomens. Most of the bumblebee body is covered with orange, bristly hairs Preferring to nest in ground holes, tree hollows, under wood piles or in building recesses, bumblebees are primary pollinators that do not produce much honey.

Larger and noisier than bumblebees, yellow jackets are easily recognizable by their bright yellow and black stripes decorating a hairy body. Yellowjackets construct nests made from a paper mache-like substance inside logs, in the ground or against building walls. Accidentally disturbing a yellow jacket nest may cause dozens of yellowjackets to fly out of the nest to defend their home by stinging you.

Unlike the fat, round bodies of yellowjackets and bumblebees, wasps have thinner bodies marked with red, brown or black patterns. They also have pinched waists and longer wings that fold against their bodies when at rest. Wasps prefer hovering around open garbage cans, uncovered bottles of sugary drinks and dumpsters. Their paper-mache nests are sometimes quite large, resembling upside-down umbrellas hanging from roof eaves and trees.

Is It Difficult to Get Rid of Stinging Insects Nesting Around Your Home?

Simply disposing of the nest doesn’t mean bees or wasps won’t return the next day and begin re-building their nest. You will have to spray the area with a pesticide to keep stinging insects from coming back. Of course, once the pesticide’s effectiveness wears off, there’s a good chance another colony of bees will decide to take up residence where an old nest once existed.

If you’re afraid to step outside your home because of stinging insects, don’t take the chance of getting stung or sickened by pesticides trying DIY methods. Call Critter ControlÂ® of Tampa for prompt, professional removal of all stinging insect infestations.