When Do Squirrels Hibernate?

Unlike many other animals, squirrel species like the eastern gray squirrel, 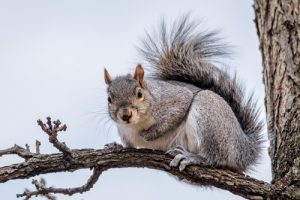 red squirrel, and fox squirrel do not hibernate during the colder months of the year. In fact, they are one of the smallest mammals that do not hibernate. Instead, they use a number of other techniques to help them survive the cold.

As temperatures begin to drop in the fall, squirrels will start making winter preparations by collecting nuts and seeds to store in safe areas like hollowed out tree trunks or inside your home. Instead of fattening themselves up at the start of winter, they have to ensure a steady supply of food beforehand so they donâ€™t starve.

Something else that sets squirrels apart from other small critters is that they not able to build and maintain high body fat levels, meaning that if food were to become unavailable for an extended period, they would not be able to sustain themselves like other hibernating animals.

Though squirrels are primarily vegetarians, they have been known to eat small birds or steal eggs when food sources become difficult to find.

Many people are under the assumption that squirrels hibernate during winter. This is due to squirrels being rarely seen out and about in the cold weather because they would rather be out of the elements just like we would. When the weather is clear you may see them occasionally, but when the temperatures drop they stay in their nests most of the time.

For reliable help with squirrels and other wildlife, contact the experts at Critter ControlÂ® of Tampa. We possess the means to not just remove the squirrels from a premise in a reliable manner, but also to eliminate potential entrances preventing future recurrences. Call us today at 813.948.0870 to learn more or to schedule a home consultation.